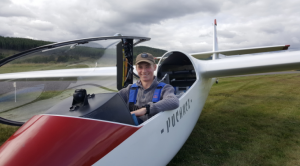 Finn Hilton today became Scotland’s youngest qualified pilot, when he made his first solo flight on his 14th birthday from Deeside Gliding Club (DGC) at Aboyne.

Finn started learning to fly at the age of 12, when he first joined the DGC Junior Training Scheme at Aboyne. In the last 2 years he has clocked up over 50 launches, at times reaching heights of more than 8000′ (2500m) above Royal Deeside and the Cairngorm mountains.

David Innes, one of Finn’s instructors, said that Finn has impressed everyone at the club with his commitment and skill.  “Finn has been ready to fly by himself for some time, but has had to wait until he turned 14.  We’ve all been watching the weather forecast nervously this week, hoping the conditions would be suitable for a flight on his birthday.  But all was fine, and at 10.40 this morning Finn was towed up to 2000′ behind a tug and flew for 20 minutes before making a text-book landing”.

Finn’s maiden flight was watched from the ground by his mother, Hannah, and grandparents.  Hannah described how Finn’s excitement grew as his birthday and the prospect of a solo flight drew closer, and it was impossible to get him to talk of anything else.

Fourteen is the legal minimum age in the UK to fly solo in a glider.  You can learn to fly a plane and go solo 3 years before you can drive a car.   DGC sponsors junior pilots through their subsidised training scheme.

Finn is the latest Junior pilot to go solo at age 14 at Deeside Gliding Club.  Previous beneficiaries of the DGC training scheme have gone on to a career in aviation, or used the experience as part of a Duke of Edinburgh award.

Gliding is the least expensive way to learn to fly a fixed-wing aircraft.  Deeside Gliding Club is recognised as the foremost wave soaring site in the UK, attracting visitors from all over the world.  The UK height record of 38,600 feet was set by a glider flown from DGC.

The gliding club started operations at Dyce at a time when there was only one commercial flight per day.  But as Aberdeen airport became busier it was obvious that a new site was needed, and gliding moved to Aboyne over 50 years ago, from where it has been operating ever since.